I’ve shared recently that I’m in the process of redoing my bedroom. While I’m not fully there yet, there’s still a few DIY’s to accomplish and, no biggie, those dang walls to paint, I have been able to squeeze in a few small changes that pack a big punch. One of my favorite pieces in my bedroom, and my apartment for that matter, is my dresser. It’s a standard IKEA buy, but I spared no time or energy in DIYing the crap out of that thing. Just as a reference point, here’s what it started out looking like:

What a stunner, huh? Not exactly. But that’s beautiful thing about IKEA. The pieces are blank canvasses! You can quite literally make a million different versions out of one piece of furniture, and, just as an added bonus, if you don’t like what you end up with, or your taste evolves, the prices are so affordable that you can do it all over again! Painlessly! I could go on and on about my love for IKEA, but instead, let me show you what the dresser looks like now. 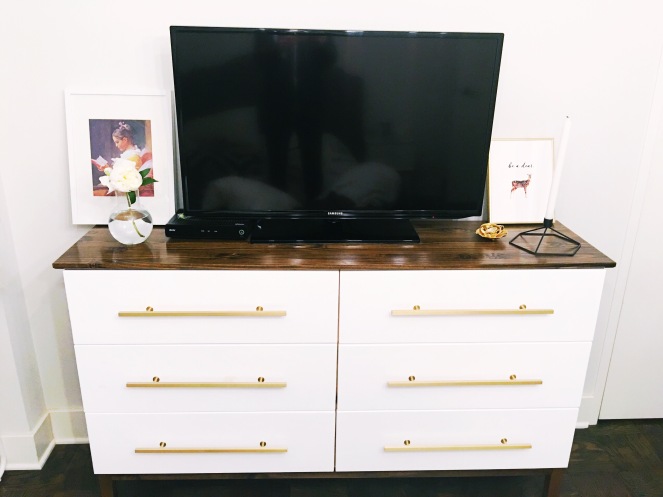 Now, direct your gaze away from the giant TV perched atop it, and concentrate on those clean lines! The contrast! That flipping hardware! 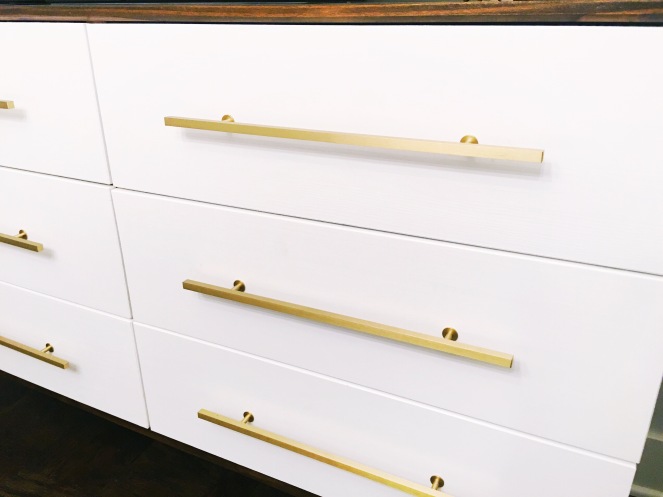 The hardware is by Lewis Dolin (available here). They’re solid brass, heavy, modern, and they cost almost as much as the dresser itself. As pricey as they were, that was the beauty of paying bottom dollar for the dresser. I knew I wanted the pulls, they were actually the starting point for the project, and I wouldn’t have been able to afford them and an expensive dresser.

So, long story short, I’ve been living blissfully with the dresser for a while now, but after creating my mood board for the new bedroom, I realized there was a quick and easy addition I could add that would make it even more fantastic. It’s drawer liners…obviously! With the overall vibe of the room, and the soon-to-come wallpaper accent wall, in mind, I started searching out some geometric, graphic, modern drawer liners. Let me tell you, this is a very undersaturated market. I found a lot of products that screamed 80’s suburb, and even more that were only slightly less distasteful versions of something Laura Ashley might have sold in the 90’s. Then I stumbled upon Chic Shelf Paper. They had hundreds of options and an easy navigation system that led me straight to a number of modern black and white patterns. In addition, they also offer a cutting service. So all I had to do was measure the pieces I wanted to line, send them the dimensions, and wait! I knew I only wanted to line the sides of my drawers, the bottoms are a glossy white finish, which I like, and I also thought the pattern would be a little overwhelming if it covered every surface, so I settled on this one after ordering a few (free!) samples:

Simple, graphic and just punchy enough to make an impact. Here’s what the drawers look like now:

The pieces are peel-and-stick, were cut exactly to my specified dimensions, and the whole process took me about 20 minutes. It’s such a small thing, but it’s had such a big impact on my daily routine. Now that I look forward to opening my drawers and seeing that geometric detail peeking out every morning, I am way more cognizant about how neat the drawers are kept. If things are folded and organized properly, I see way more of the liners than if t-shirts are stuffed to the brim. Yet another reason to rethink the traditional placement of drawer liners, if they were only on the bottoms of the drawers, if never see them! What’s the point of that?

While I had liners on the brain, I also picked up some for the over-the-toilet unit in my bathroom.

This shelving unit is the bane of my existence, but there’s no avoiding it in a teeny-tiny bathroom. The walls are floor-to-ceiling told, so I can’t install shelves without risking my security deposit, and my sink has no cabinet underneath. So, I live with this unit, which is the best looking one I could find. With its new makeover though? Not bad! The pattern is soooo much better than the original honey-colored wood, and for these liners I chose a wipe able finish, so they can be spritzed and cleaned with the rest of the bathroom.

What do you guys think? Are you on board with shelf liners? Or am I living in a bygone age here? I just love how thoughtful it feels to open a drawer and see that the room’s design continues inside! Maybe I’m way off base here, but I say long live the shelf liners!